CARGO CULTS: WARSHIPS AND THE MILITARIZATION OF SPACE 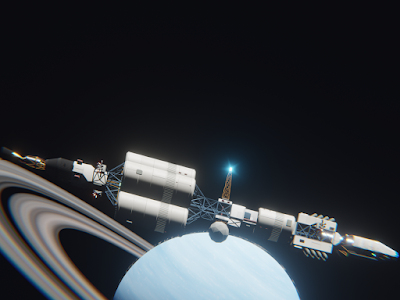 The People's military planners do not, as a rule, view space (and especially space beyond Low Home Orbit) as a very important theater.  Second-generation manned reconnaissance stations are useful but hardly worth expending enormous resources to protect.  To some extent, this is because most decisionmakers have embraced a singularly bleak approach to nuclear deterrence.  In the face of a catastrophic threat, a defending polity will detonate dozens nuclear bombs buried on the leeward side of mountains.  With yields between 50 and 100 megatons, these bombs would be sufficient to collapse Home's fragile biosphere and starve the entire population.

This grim reality has freed up many resources previously devoted to maintaining a robust ballistic missile-based nuclear deterrent for exploration efforts.  Incidentally, colonizing the other (much nicer) inhabited worlds provides for continuation-of-government (and civilization) in the event of an apocalyptic nuclear war on Home.

Military activities in space provide a safe way for polities to posture and bluster without unduly threatening their rivals.  Among cultures with rich traditions of solving problems with low(er)-stakes ritual violence, this is an appealing state of affairs.  ISRU platforms and transport ships are expensive targets, and while nobody has pulled the trigger yet, the ability to threaten surface colonies, space infrastructure, and the posturing leading up to an attack are regarded as an important tool.

Increasingly critical is the ability to carry a nuclear deterrent to Emerald and Sapphire.  While the People's small colonies on those worlds are not big enough yet, allowing continuation-of-government/culture on those worlds is unacceptable.  In the meantime, the People's colonies are critical prestige projects that justify some measure of protection.

All told, there are only nine vessels that can fairly be regarded as dedicated "warships" split between several major polities.  These ships are all broadly similar in performance.  Each mounts a handful of autocannons and carries between 6 and 16 nuclear missiles (this is surplus ordinance shipped into orbit).  These ships are generally on patrol or based on or near one of the Eye's smaller bodies but they steer well-clear of LHO to avoid a sucker punch from a surface-launched antisatellite weapon.

As yet, there has not been a shooting war and the economic boom and optimistic mood triggered by major colonization efforts has reinvigorated cultures exhausted from a decades-long period of brutal conventional warfare and healed some old wounds. 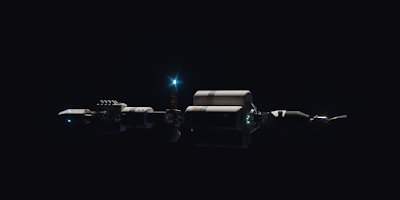 e pi'i Gbi -- the Shining Basin Polity's first warship, named for the
first Person to set foot on Sapphire shortly before the Cataclysm.

Blogs I Read That You Should Also Read